Besides both featuring in early music and belonging to the woodwind family, the flute and recorder have little else in common.

As you will come to see from this recorder Vs. flute comparison, they each have their complexities, specific repertoires, unique playing techniques, and unique sounds.

Similarities Between The Flute and The Recorder

The transverse flute is a side-blown instrument in that the embouchure hole is located perpendicular to the flute’s body length. As such, the instrument is held and played horizontally.

No. of tone Holes

The recorder has 8 holes: 7 finger holes and a thumb hole. The seven finger holes are divided as 4 for the lower hand and 3 for the upper hand.

The standard flute has 16 tone holes. However, you will commonly find a low-B extension on the higher-quality western concert flutes, giving you 17 tone holes in total.

The 16 holes make it possible for a flutist to play in every key. Not just that, but the instrument is set up to be easy and intuitive to play.

The fewer holes on a recorder means that the player will sometimes have to perform complex and unpleasant finger combinations to play all the notes of the chromatic scale.

On the other hand, the western concert flute is designed to make the mechanics more convenient for the player.

The numerous tone holes ensure that a player can play a single pitch more easily than they would otherwise be able to. For instance, there is a hole specifically for G# on the modern flute, and this hole isn’t used for any other pitch. Mechanically, the flute is more complicated than the recorder. The modern flute uses a flap key system whereby you push or release keys to play different pitches on the instrument.

Most keys will close tone holes when pressed down. However, you also have some keys which open holes when you press down on them. Additionally, some keys cover more than one hole, and different key combinations cover or uncover different tone holes.

It can all seem somewhat confusing when you start playing the flute.

On the other hand, the recorder is a rather straightforward musical instrument. It has simple finger holes drilled directly into the tube of the body, and you play different pitches by simply covering or uncovering different tone holes.

Recorders may be made using wood or resin, whereas modern flutes are constructed from wood or metal.

Wooden recorders have a distinctive rich tone, making them much more rewarding to play because they are more expressive. Besides, the higher resistance in wooden recorders means that they are easier to play than plastic ones.

The downside is that wooden recorders are pretty expensive and require intricate maintenance.

Plastic recorders clog up pretty quickly with moisture. However, they are moderately priced and pretty easy to maintain.

Wooden flutes such as the Baroque flute have a beautiful solid, mellow tone. Because they lack projection, though, you will often find these being used for folk music.

Metal flutes resonate much better giving a bright sound that best suits an orchestral setup. The downside is that the tone can sound too shrill or tinny.

The term flute is broadly used to refer to a variety of reedless wind instruments which produce sound when air flows across an opening. By this definition, the recorder falls in the subcategory of fipple flute.

The biggest physical distinction between flute and recorder is actually this design element. The transverse flute has no fipple.

Recorder players blow into a constricted mouthpiece that’s the fipple.

Thanks to the fipple design, an inbuilt duct directs airflow across the edge of the tone hole. As such, the path of air through this gap in the mouthpiece on a recorder is pre-determined and fixed.

You play the flute by blowing air across an open hole on the flute’s head joint.

Unlike the recorder, flutes don’t have a fipple that guides airflow. Instead, the flute players must form this path themselves using their lips on the embouchure.

Recorders have a smoother, purer sound than the flute, whose sound is typically brighter.

As seen from their respective instrument families, both musical instruments produce different voicings designed to cover a wide range of pitches.

Practically, the soprano recorder can play any pitch within the range of C5 – C7.

On the other hand, the alto recorder can play lower pitches, having a practical range of F4 – F6. This recorder is better suited for older, more advanced players because it is longer, and as a result, the finger holes are spread out more.

The range of a recorder is about 2 octaves. However, a skilled player can extend this to 2 octaves and a fifth. The extension would be one semitone above the lowest note, achieved by covering the end of the instrument.

Similar to the recorder, the flute is also a non-transposing instrument. Meaning a C on either instrument is a C on the piano. This is unlike other instruments such as the clarinet, but that’s another discussion altogether.

Another thing to note as a general rule on both the flute and recorder is that the more holes you cover while playing, the lower the pitch. So while playing flute, this translates into pressing down more keys to achieve lower notes.

Although the flute ranges about 3 octaves, skilled players can extend this range using advanced playing techniques. Ideally, you can change the lowest note by a half step by changing how you blow into the embouchure or having a longer foot joint.

Is Recorder Easier Than Flute?

Yes, the recorder is easier than the flute.

The recorder is easier than most instruments, and recorder playing is relatively straightforward in that an utter beginner can make a sound on the recorder straight away.

This does not mean that you will instantly be playing beautifully clear notes. As expected, you will squeak initially, but still, you will be able to produce a sound from the instrument.

On the other hand, it takes time to learn how to produce sound on the flute because the angle at which air hits the mouthpiece is what activates acoustics, thereby creating sound.

As a result, playing this transverse instrument involves finding the correct position with your lips, which requires great control of both the lips and the respiratory system.

Nonetheless, it might be easy getting started on the recorder but do not be mistaken – it is a difficult instrument to master. Playing recorder music at an expert level means using the various fingerings, shades of tone, and the many techniques unique to this particular instrument.

Can A Recorder Play Flute Music?

The recorder is best suited for early music, which is why you will likely find it in Baroque period ensembles. On the other hand, flute music is far more diverse, ranging from jazz to modern pop and western music.

This has a lot to do with dynamic control, whereby the recorder is regarded as a soft instrument that’s much quieter than the flute, which has more punch and power.

Which Is Better Flute Or Recorder?

The flute is better than the recorder when it comes to providing a more present sound ideal for orchestras.

The higher volume and range give the flute a wide range of articulations with tonal variety and even special effects.

On the other hand, the recorder is better than the flute when it comes to the ease of playing it at a basic level.

Additionally, it is an excellent option for musicians interested in period music so much that modern film composers use recorder music to set a scene in medieval times.

All in all, the flute and recorder are early instruments that are still popular even in the modern age. Each has its strengths, just the same way each has its limitations, so your choice of either instrument will depend purely on your musical needs.

Is The Flute Louder Than The Recorder?

Yes, the flute is louder than the recorder.

Generally, the recorder is regarded as a soft instrument. Some people believe that plastic recorders are loud, but in fact, they are squeaky rather than loud.

The recorder might be easy to start on, but the recorder technique is quite challenging to master.

In contrast, it might take you a while to get any sound from the flute, but once you’ve gained the ability to do so, progressing on the instrument will be relatively easy.

Ultimately, the flute and recorder might be related instruments, but each has unique qualities that set it apart from other flutes in the woodwind family.

Whichever one you pick, have fun with it. As your technique improves, either instrument will surprise you at just what you can achieve with it. 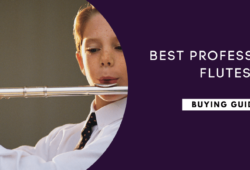